Thank you:  Images from System16.com, video from CAVEPCB on YouTube & review from an archived version of CAVE-STG.com. 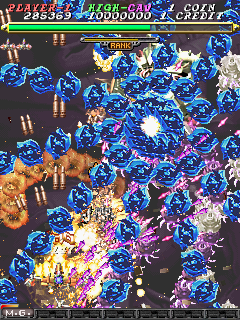 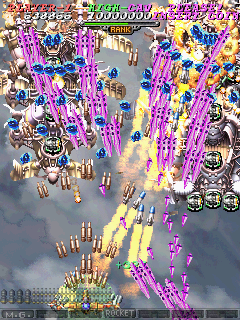 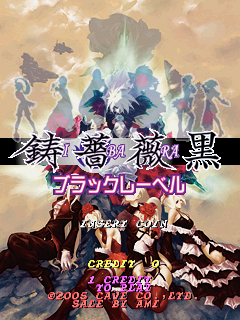 By EOJ /  February 17th, 2008
This review was originally published on CAVE-STG. 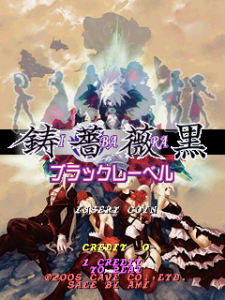 Cave’s “Black Label” version of Ibara, entitled Ibara Kuro: Black Label (henceforth IKBL), was released in Japanese arcades in February 2006. It is notable for being the only Black Label game to actually have an official page on the cave.co.jp site, though it is as simplistic as they come, basically being an online POP. IKBL is a beautifully designed game programmed by the relatively unknown Mamoru Furukawa. After playing this game extensively over the past year, all I can say is that I can’t wait for Cave to let him program another shooter. This guy has talent.

First, let’s begin with the basics about the mode, ship, and shot types. At the title screen, we soon discover the diverse play-mode options of Ibara, such as Harder and Extended, are gone. This time, in traditional Cave fashion, there is only the main game mode. Once we press start, we find a character select screen. Well, not quite. The characters Bond and Dyne are still locked to the 1P and 2P control sides, respectively. However, you are able to select your ship type – either the original Ibara ship (called the Silister Similis) with a straight shot, or the new ship called the Dio Spirossi with a wide shot – and one of four shot types (A-D) for that ship, complete with mini graphic additions showing you the power and bomb type of each. Altogether there are 16 combinations of ship and shot types between the two pilots.

When you start the game you’ll notice a few differences in the on-screen display, namely a rank meter at the top center, a weapon bar across the bottom, and life gauges on the bosses.

In terms of the scoring systems and other aspects of the game system, for a detailed description, including the differences between IKBL and Ibara, see my strategy guide. The main thing to know is that there is a new feature called the “Xtreme Terror Counter (XTC)” which makes the game play significantly different from Ibara and Ibara Arrange on the PS2. The XTC system is the key to all high scores in the game, and bosses can be milked to death with it for insane score boosts. It forces you to play at max rank for as long as possible, as this is the only way to get a high XTC. It is a system that keeps you on the edge of your seat, constantly bombarded with a screen full of fast, dense bullets. This, combined with the stellar graphics of the core Ibara game, give an experience that is like no other. It is a feeling of pure power and adrenaline, blowing everything in sight to pieces while gracefully vacuuming in all the items near your ship, changing weapons at will, steadily increasing your XTC, and seeing your score get higher and higher with every passing frame. And after you maximize the XTC you can trigger a bomb amidst this bullet hell, instantly clearing the path, reaping the benefits of another multiplier, and bringing the enemy to its knees. Or you can choose to keep riding that XTC for steady gains (this is usually the more beneficial option during a stage, though it is also much more difficult). It is shooting bliss, pure and simple.

Of course you can play through the game like Ibara Arrange mode and it’s not terribly difficult to clear (also like Ibara Arrange!). Your score will also be complete garbage, however. It’s much like trying to clear DDP:DOJ without chaining. Possible, and easier, but you have zero chance at getting any sort of respectable score. So in summation, don’t be a wuss. Play at max rank as much as possible and jack your XTC through the roof. That’s what this game is all about.

A downside to the XTC system is that it requires a lot of time-consuming boss-milking if you want a good high score, and this certainly isn’t everyone’s cup of tea. While I enjoy the boss milking (though admittedly not as much as I enjoy it in Muchi Muchi Pork! ), the excessive nature of it may put off some Cave fans. But if you’re a Raizing fan, you’ll probably love it, and it isn’t much different from the boss milking in the original Ibara, in terms of the amount of time and the degree of precision involved.

In regard to the music, a few stages feature remixed versions of songs only available in Ibara’s Extended and Harder modes (for example, Stage 1). The rest of the music is the same as in Normal mode Ibara.

Overall, I really think this is one of the better games Cave has put out. There is a reason why some of the top players in Japan love this game – players like RAM, TGA-RET, and KHD, the latter of whom holds the current WR (223mil) and claims it to be his all-time favorite game. IKBL is not a replacement for Ibara, but rather a totally new interpretation that plays almost completely differently. Both games are essential playing experiences, though personally I prefer Kuro. Unfortunately, IKBL was made in small numbers (likely around 200-300 copies total), and many may dismiss it as just “a flashier, more expensive Arrange mode” before venturing to get a grip on its complex and challenging, yet extremely rewarding and fun scoring system. I feel sorry for those people. But hey, it’s their loss.